Modularity has been at the core of Bitwig Studio from the beginning. Devices can be nested, clips are containers, modulators exist everywhere, and practically anything can be dragged anywhere. The Grid is the next logical step.
The Grid is a modular sound-design environment that powers a family of devices in Bitwig Studio: Poly Grid and FX Grid. With a vast library of modules and a supersonic workflow, you’ll be creating your own unique sounds immediately, and in high-fidelity. Simply add a Grid device to your project and start patching. It’s fun.

Construct a polyphonic synthesizer from scratch in one session. Create an adaptive audio effect with your signature sound. Experiment with generative drones until you find a new way to perform. Or simply create the undefinable. Patching is effortless, giving full reign to your creativity.

Sounds of The Grid

A great entry point into this new world is any of the 250+ Grid factory presets. Load a Grid device (either the Poly Grid instrument or the FX Grid audio effect), and enjoy a diverse collection of preset patches. And before you explore the patches in depth – these presets are good examples – first load them up and just start playing.

Start with the playlist to get a taste.

The technology powering The Grid is as it should be: working, felt, and transparent so you can focus on the sound. Here’s a taste of what we’ve done.

All signals are created equal. In The Grid, all signals are interchangeable so any out port can be connected to any in port. While this is rarely the case in other programs, Bitwig Studio has made it so. Try something crazy; you (probably) won’t get electrocuted.

Every signal is stereo. Yes, every audio cable is stereo, but so are all control signals as well. By altering any of these control signals, their corresponding audio will be affected. And plenty of modules are ready to help you Stereo-ize your signals…

Getting more with less cords. For signals that are needed regularly, we have the option of pre-cords. These clickable icons appear beside in ports, allowing common connections to be made wirelessly. And with The Grid’s quick workflow gestures, new modules can be dropped directly onto ports, automatically wiring them into your patch. Work smart instead of hard.

Phase is the place. Along with pitch, timbre, and loudness, phase is another essential element of sound, capable of driving basic time functions, complex modulation synthesis, and so much more. With a dedicated category of phase modules, these concepts are freshly accessible and newly relevant for modern music production.

Efficient workflow also means finding the information you need, when you need it. So each module in The Grid has an interactive help view that both describes every parameter on the module and allows you to keep tweaking the settings. And simply selecting a module displays all incoming and outgoing signals in the Inspector Panel. The details are always at your fingertips, right when you need them.

Audio and Then Some

Best of all, this new system is a completely native part of Bitwig Studio, giving you so much more to work with than audio.

Show Me The Modules

The Grid offers some 165 modules (and counting) for realizing your modular dreams. They are plenty diverse so here is an overview by category:

I/O (18)
Terminal modules for signals entering or exiting this Grid device, such as Velocity In, Audio Out, and CV Pitch Out
Display (7)
Visualization and note-taking modules, such as Oscilloscope and Spectrum
Phase (15)
Modules that output wrapped phase signals, such as Phasor, Ø Scaler, and Ø Formant
Data (11)
Lookup modules that are read with incoming phase signals, such as Pitches, Probabilities, and Ø Window
Oscillator (7)
Periodic signal generators based on waveforms or samples, such as Pulse, Swarm, and Sampler

Random (4)
Aperiodic and randomized signal generators, such as S/H LFO and Dice
LFO (3)
Periodic low frequency oscillators, such as LFO and Transport
Envelope (8)
Modules that produce or extract an envelope, often with a normaled amplifier, such as ADSR and Follower
Filter (7)
Frequency-dependent amplifiers, such as Low-pass LD, SVF, and Comb
Shaper (7)
Various linear and nonlinear waveshapers, such as Quantizer and Wavefolder
Delay (5)
Delay functions, some allowing patched feedback, such as Mod Delay, All-pass, and Recorder
Mix (10)
Signal routing and mixing modules, such as Mixer, Split, and Stereo Width
Level (17)
Amplitude-based functions, values, and converters, such as Attenuate, Bend, and AM/RM
Pitch (6)
Modules that produce pitch values, such as Pitch Quantize and Zero Crossings
Math (18)
Basic arithmetic operators, such as Subtract, Minmax, and Round
Logic (22)
Comparators and other modules that output logic signals, such as Clock Divide, =, and XOR 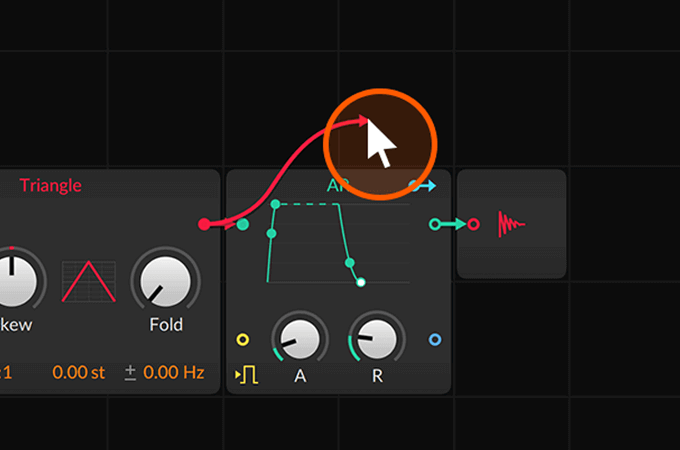 Learn Bitwig Studio
Getting Around In The Grid

Take your first steps in The Grid with this tutorial explaining workflow and concepts. 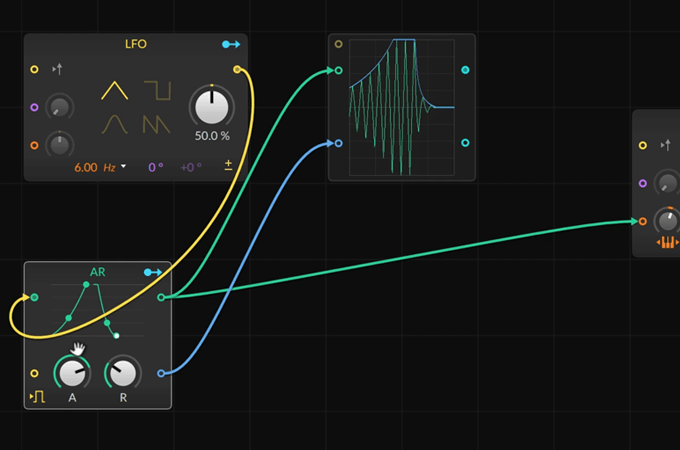 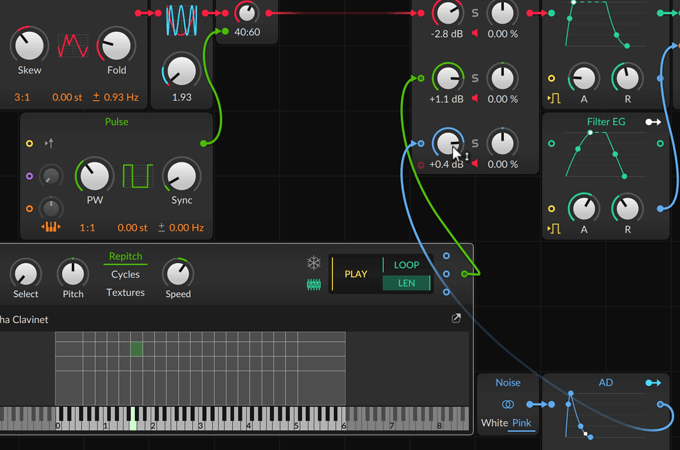 This tutorial constructs a basic synthesizer in The Grid.