For Bitwig Studio 3.2, we focus on greater control and sculpting possibilities for all sounds, whether coloring audio sources or reinterpreting note messages in new and adventurous ways.

EQ+ brings a new look and modern sound to Bitwig Studio. It's a feature-packed graphical equalizer with up to 8 bands, excellent visualization, mouse gestures, and new algorithms.

And while it is a graphical equalizer, EQ+ goes a step further by applying a rainbow color spectrum to the EQ curve, which can also be seen in EQ-2 and EQ-5. Seeing frequency settings colored predictably creates a kind of sonic muscle memory, connecting sound with visuals. Another feature we’ve included for the EQ+ is that you can select a Reference track and it will be shown as a purple curve inside the spectrum display. This way you avoid populating similar parts of the frequency spectrum with different tracks.

EQ+ is optimized for high efficiency, yet offers pristine audio quality. This is EQ+ in a nutshell:

To get you started with EQ+, watch this walk-thru of Bitwig’s flagship equalizer. See it in action for mixing, mastering, and sound design.

Bitwig Studio’s Saturator is a unique waveshaper for cooking up any sound material with adding the right amount of buzzing, rumble and warmth. Unlike most waveshapers or distortions, this one works in the log domain, just like our ears. So with Saturator, richness can be added to any sound in just the right places.

The basic, high-level panel displays the curve being applied along with Drive, gain Normalize, low-pass controls, and Makeup Gain that can either lighten the saturation or turn it into a dynamics processor.

The expanded curve editor offers a matching set of Threshold, transform Amount, and Knee controls for the Quiet and Loud portions of the signal. And additional skew controls take the Loud sounds and treat the positive and negative transients differently, adding additional richness to the sound and spectrum.

We’ve also added a Saturator module to The Grid, where polyphony allows each note to be independently shaped for even more sonic possibilities.

While tools like EQ+ and Saturator are made for fine control over sound, some tools bring life and pleasant unpredictability to your process. The play between will and luck is at the heart of these tools, just as it’s at the center of making music.

Arpeggiator, a source of creativity in all versions of Bitwig Studio, has added a number of features and possibilities. Along with controls for velocity and note length, each step now has a pitch control which functions like step sequencing new patterns on top of the notes being held. And for those using MPE-enabled or other advanced controllers, micro-pitch changes are now tracked, and per-note pressure messages will update note velocities for more dynamic performances. 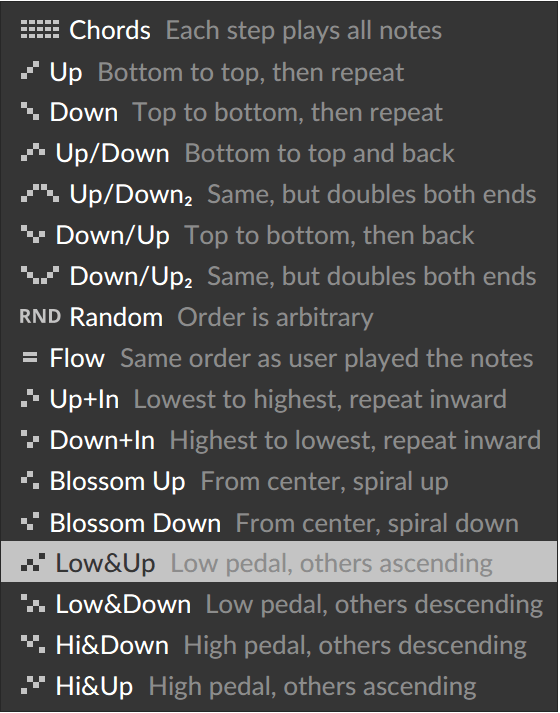 Additionally, a number of new arpeggiation shapes have been added, including blossoming out from the center and spiraling in toward the middle. Another interesting addition is the new Octave Behavior option, which adds more pattern and sonic variations when the Octave Range is greater with three settings: Broad, which takes each additional octave in sequence, stacking them up with possible irregular/repeating patterns; Thin, which flattens and sorts all notes into one linear shape; and 1 by 1, which executes the full pattern in each octave before moving to the next octave. You can also swap the synced timing out for a millisecond clock, maybe to stutter the end of a phrase. Or keep a note interval but play it off the beat grid. Or turn global note length up to 400% and let notes overlap for new harmonies. Or even Humanize step start times and velocities. The piano interface is newly flexible.

Bitwig Studio’s Instrument Selector, Note FX Selector, and audio FX Selector have all gained voice modes, for dynamically triggering different layers. Whether each note of a chord needs a slightly different preset or a totally different VST, these modes will handle the details without any fuss. The same for a few arpeggiators set to do polyrhythms or a pile of audio effects that should be swept thru.

Some modes switch layers when a new note arrives, such as Round-robin and Free-robin, which pass each note (or individual chord notes) to different layers; Free Voice, which targets unused layers first (ideal for creating polyphony with Eurorack hardware); and Random and Random Other, which spread things out (particularly nice with a pile of different audio FX). And any of these modes will take the same sequence of notes and transform it into a new bouquet of sound.

Keyswitches turns a range of notes into controls that target specific layers (good for film scoring with different sounds and articulations). CC mode uses any control change message to sweep through the available layers (like using mod wheel to cycle through various note FX), and Program Change does the same with those kinds of MIDI messages (common from pedal controllers, etc.).

What all modes have in common is an awareness of how many layers are available. So when another audio effect or synth patch gets added, all the setup work has already been done.

Finally, evolving sounds are easier to create at all levels. To delay an entire device chain, Note Delay waits up to two bars (or five seconds) before passing notes to a layer. On the modulation level, the ADSR, AHDSR, and Note Sidechain modulators all have similar Pre-delay controls now. And within The Grid, the start or release of signals can now be suspended with the Logic Delay module. In addition, the new AHD on Release modulator animates any parameter note release for instant responsiveness. Sum it up and creating growing sonic landscapes has been made simple on every level.

And a Few More Things

To round out this release, some requested workflow enhancements are here. Drum Machine offers local audio returns, and spectrum analyzers across the program show the full audio range better. The Mixer View now has mini displays for some devices, and dropping a sample into a Grid patch creates a Sampler module with that audio, Tool gained an extra volume control that goes down to silence, and so on.

Bitwig Studio 3.2 also brings some new (and improved) Grid modules along for the ride:

To coincide with Bitwig Studio 3.2 and its broader modulation possibilities, we present a package of Evolving Sounds and Sequences. Along with our friends Polarity and the irrepressible Joerg Sunderkoetter (aka "Jurgis"), 68 new presets have arrived, each bringing inevitable motion and a range of possibilities.

Listen to the sound examples and visit here for further details. Evolving Sounds and Sequences is available in your Package Manager now (requires Bitwig Studio 3.2).

Sonic State covered the 2020 Superbooth Home edition through their channel, and we’re part of it.

With Bitwig Studio 3.1 we widen the boundaries of pitch and scale.

In the spirit of The Grid, our new Note Grid device allows you to build your own note FX.