BEHIND THE SCENES: MODULARITY IN BITWIG STUDIO

Coinciding with our announcement of Bitwig Studio 3, we’d like to take a moment to look back at our perspective on software and how it has informed our journey, up to today and beyond.

A Word on Modularity

From the beginning, the idea of modularity has been central to Bitwig Studio. While digital audio workstations (DAWs) aren’t known for taking a modular approach, creating Bitwig Studio from the ground up allowed us to rethink previous assumptions. This led us to focus not just on individual devices but on strengthening the ways they interact with and support one another. And this ideal has born interesting, user-friendly fruit.

The first outcome was nested device chains, which allow you to house devices within other devices. A seemingly simple benefit of this is that device presets can now contain multiple devices, but this also opened up novel signal routing possibilities. For example, what if any device or plug-in could be used in a multiband configuration? Or if it was easy to add effects to just the wet signal? Or if devices could be added to a feedback loop?…

A core principle of modularity is that different users with different wants and needs can use the same tools in equally accessible and unique ways. Nested device chains allow newcomers to focus on richer sounds while initiated users can use additional devices as a way of extending their sonic palette. Win, win.

Another powerful outcome of modular thinking in a DAW was modulation sources. First, we created an elegant, efficient way for modulation signals to be assigned — simply clicking an arrow to go into routing mode, and then using parameter knobs themselves as attenuators. With a clean interface, it became possible to create and manage an unlimited number of modulations, all operating at audio rate.

And from there, all nested devices can be modulated as well. So instead of putting an LFO on our synth’s cutoff filter and then spending a lot of time trying to rebuild a synced LFO-effect on the following distortion device, we can simply assign the synth’s LFO to both the cutoff frequency and the distortion amount. Additionally, Bitwig Studio 1 had devices made just for modulating other devices (like a standalone LFO, or a routable audio sidechain effect). A lot of freedom was provided by these early modulator devices, but at the cost of having to nest any devices you might want connect to each other.

The idea of modulators was reclaimed in Bitwig Studio 2. Instead of using a standalone “modulator” device to modulate a single device, each device was given slots that can house true modulators. This means any device (or plug-in) could now have an envelope added to some of its parameters. Or a step sequencer, or an audio sidechain effect. Or 12 LFOs. As modularity dictates, you are in complete control of how the tools are used.

This also served to made things more efficient for both CPU cycles and screen real estate. Instead of building an arbitrary number of control devices onto each instrument — say, two LFOs — the user could now add and subtract these options as they see fit. And again, presets from Bitwig Studio 1 and 2 would load properly, with modulators added as needed.

We don’t build a chorus in to every instrument just in case the user wants it. Instead, we create a good chorus device that can be added when needed. The same principle informed our design of modulators, affording maximum flexibility to our users.

With a combination of new devices and some special-purpose modulators, outboard modular hardware was also natively integrated into Bitwig Studio. Beyond routing audio signals in and out, this integration extended to all manner of control voltage (CV) signals.

For standard control and gate signals, this means internal switches for dealing with DC or AC interfaces, coupled with range adjustments and signal smoothing. Clock signals can be either provided to your hardware or received from it. And for pitch signals, an entire automatic tuning system was developed. So now anytime an oscillator is nudged intentionally or otherwise, you can retune Bitwig in approximately six seconds. Not bad for a digital system. 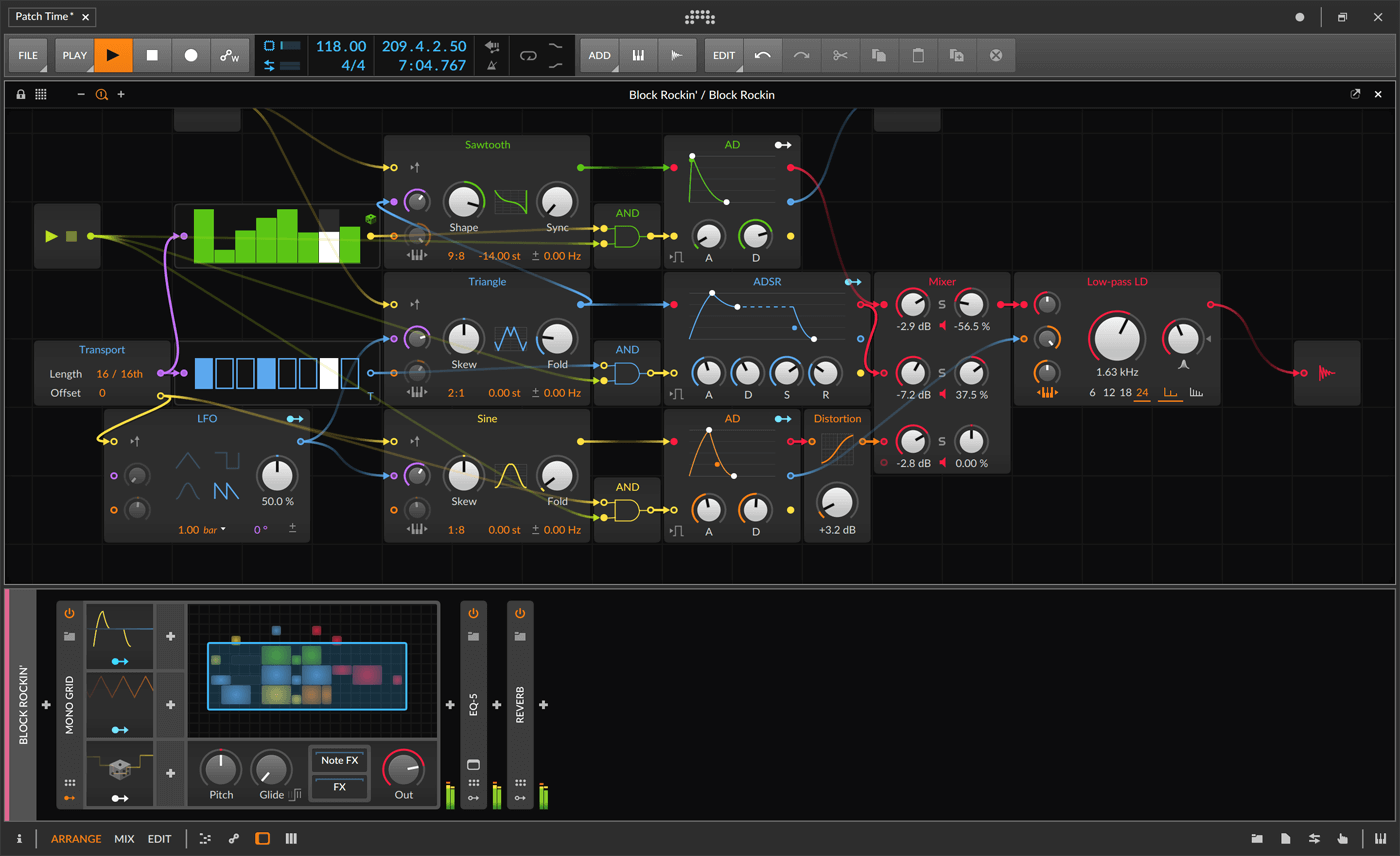 Fully-modular Sound Design within The Grid

As was hinted at from the start, Bitwig Studio was always intended to provide a fully-modular sound design option for our users. This has become reality with The Grid.

Sporting a bevy of modules and a supersonic patching workflow, The Grid is a truly modern modular patching environment that lives within a family of new devices. Ideal for designing sounds and harnessing synthesis, The Grid is based around ideas familiar to Bitwig Studio: the workflow must be direct and fun, the technology must be powerful yet transparent, and the sound quality must be pristine.

While all Grid devices works in the same way, each allows for different configurations. Want to build a polyphonic synth? Start with Poly Grid. Need an adaptive audio effect with your signature sound? FX Grid will chew up incoming audio, either gently or otherwise. In the mood for cascading drones?

The technical feats that make this possible are numerous. From dropping in new modules with automatic wiring, to making common connections preconfigured and wireless, to all cables being stereo and oversampled and compatible with each other — The Grid is the product of these individual advances, all connected into something bigger that lets you keep the focus on your work.

Bitwig Studio is already a software home for plug-ins of all bit depths, controllers that speak regular MIDI and MPE, and outboard hardware that supports audio, CV, clock, gate, or all of the above. Now that all your components are living in the same tent, we are working on more effortless workflows, for both the studio and the stage. This includes additional devices and modules for sure, but also some new approaches to old problems. We look forward to inviting you in for these enhancements and much more.

Thank you for having read this far. If you don't own Bitwig Studio yet, then come join us on our journey. We’d love to welcome you as part of the Bitwig community.